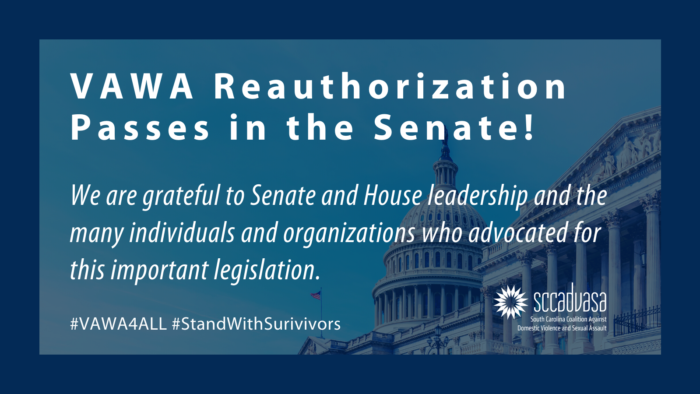 On March 10, 2022, the reauthorization of Violence Against Women Act (VAWA) was passed by Congress as part of the Omnibus Fiscal 2022 spending package.

The passage of the bill reauthorizes VAWA programs until 2027. This article provides a good overview of what the bill contains and some of the proposed protections that had to be dropped to ensure bipartisan support.

We are grateful everyone who called and emailed our Members of Congress to urge their support for this bill. Thank you!

On February 9, 2022, a bi-partisan Senate reauthorization of VAWA was introduced by Senators Durbin, Ernst, Murkowski and Feinstein (S.3623).

As of Monday, February 28, neither Senator Graham or Senator Scott have signed on as co-sponsors. There are currently 21 co-sponsors (including 11 Republicans).

We urge you to contact our SC Senators’ offices to let them know how critical this legislation is to continued work to end sexual and domestic violence. Scroll to the bottom of this page for draft communications and direct links to contact their offices. Remember, all calls and emails will be tabulated, so let’s all do our part to ensure our SC Senators know that constituents support this bill.

From our national partners:

Among other provisions, HR 1585 (and now this new VAWA bill):

Update January 7, 2022: The introduction of a bi-partisan VAWA reauthorization bill in the Senate is expected by the end of January 2022.

Senators Dianne Feinstein (D-Calif.), Joni Ernst (R-lowa), Dick Durbin (D-Illinois) and Lisa Murkowski (R-Alaska) released a joint statement on December 16, 2021 that outlined their agreement on a framework for reauthorization that recognizes the importance of VAWA in preventing violence, supporting survivors and increasing accountability for offenders.

“We are committed to introducing a bipartisan, modernized VAWA reauthorization next month. Every day that goes by without action puts lives at risk, and we will work tirelessly to ensure that this framework becomes law as soon as possible.”

It will be critical to build momentum in support of this bill to encourage and attain 60 Senators to vote YES in order to ensure its passage. We hope all of you will take action and contact our S.C. Senators (click on the buttons below) to let them know that you #StandwithSurvivors.

Update March 18, 2021: Late yesterday evening (3/17/2021), H.R. 1620 passed in the House of Representatives, 244-172 with bipartisan support. We are thankful to Congressman Clyburn for his willingness to #StandWithSurvivors and vote yes on this bill.

Update March 16, 2021: This bill is being fast-tracked with the hope of passage by April. It is expected to be on the floor this week. Although 170 co-sponsors have signed on to the bill, no members of the South Carolina delegation are currently listed.

Now is the time to call/email your Senator and urge them to swiftly pass the VAWA Reauthorization.

The National Task Force to End Sexual & Domestic Violence has drafted the following talking points for your use.

My name is [your name], and I am a constituent from [your location and, if you are affiliated with a domestic violence or sexual assault program, the name of your program]. I am emailing today to urge Senator [Senator’s name] to co-sponsor Senators Feinstein’s, Ernst’s, Durbin’s, and Murkowski’s upcoming bipartisan consensus bill to reauthorize the Violence Against Women Act (VAWA).

VAWA is one of the pillars of the federal response to domestic violence, sexual assault, dating violence, and stalking. [Tell your Senator why VAWA has been so important to your community or, if you have a story you feel comfortable sharing, share your experience]. Every time VAWA has been reauthorized, it has been strengthened based on our increased understanding of gender-based violence, and this reauthorization can be no different. The COVID-19 pandemic, when the rates of domestic violence and sexual assault have increased, is not the time to roll back important protections or even to maintain the status quo. Senators Feinstein, Ernst, Durbin and Murkowski have announced they will be introducing a bill to reauthorize VAWA this month which will maintain protections for all victims; make vital investments in sexual assault prevention and services; ensure predators who prey on Native women and children can be held accountable; invest in culturally specific organizations; improve access to safety and services for victims in rural communities, underserved communities, and LGBT communities; protect victims of domestic violence from intimate partner homicide; and increase victims’ access to safe housing and economic stability.